Got Cash! Saving vs. Investing 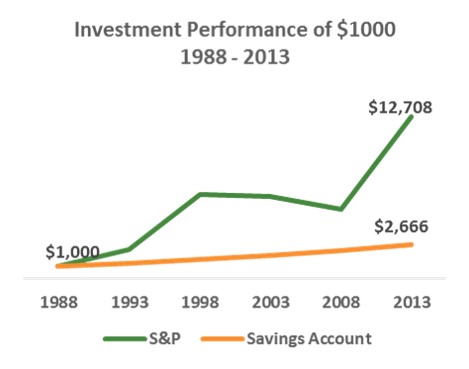 In its simplest terms, if you want to buy something in the near future, open a savings account.  If you have some extra cash laying around (that you don’t plan to use for several years) AND you’re not afraid of it losing value in the short term (approximately 5 years), consider investing in the stock market.  Putting your money in a savings account will keep it safe but it will only grow at a fraction of what the stock market has averaged over the last several decades.  Consider the following scenarios: 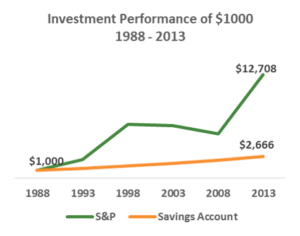 In this scenario, $1000 invested in the stock market in an investment that was tied to the S&P would be worth 12 times more after 25 years.  The same amount kept in a savings account would have grown only just over 3 times.  And, this is assuming a very generous 4% interest rate paid on your savings account!  Even after the recession of 2001 and 2008, you would have been way ahead compared to returns from a savings account.  As a matter of fact, your $1000 investment in any time period in the S&P 500 after 1988 and kept until 2013 yielded more than having your money in a savings account.  The only exceptions would have been had you started in 2000 and kept your money invested in the stock market until 2013. 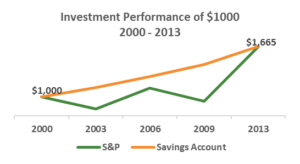 You cannot lose money in a savings account; the federal government, through the Federal Deposit Insurance Corporation, or FDIC, insures their value, up to a limit. When you invest money, however, you automatically assume a level of risk. Generally, your goal is to achieve a relatively high rate of return, but you must balance the desire to make money with your tolerance for losing it. Most investors, particularly those with quite a few years left before retirement, use stocks, in some form, as a large part of their investment strategy.

Kiplinger's Personal Finance magazine is a great personal finance monthly magazine with short, easy to read and understand stories on everything from budgeting to investments and strategies on how to keep more of your money.

With The Total Money Makeover: Classic Edition, you’ll be able to design a sure-fire plan for paying off all debt, recognize the 10 most dangerous money myths, and secure a big, fat nest egg for emergencies and retirement!

The greatest investment adviser of the twentieth century, Benjamin Graham, taught and inspired people worldwide. Graham's philosophy of "value investing" -- which shields investors from substantial error and teaches them to develop long-term strategies -- has made The Intelligent Investor the stock market bible ever since its original publication in 1949.

The Compound Effect is based on the principle that decisions shape your destiny. Little, everyday decisions will either take you to the life you desire or to disaster by default. This easy-to-use, step-by-step operating system allows you to multiply your success, chart your progress, and achieve any desire. If you’re serious about living an extraordinary life, use the power of The Compound Effect to create the success you want.

Hustle Away Debt gives millennials drowning in debt a lifeline. Carlson details his secrets to getting out of debt through the concept of “side hustles.” He shows how side hustles can help you develop new sources of income that allow you to pay off debt faster.

In The Truth About Money, Ric Edelman, America’s most successful financial advisor, tells you everything you need to know about money. This is an indispensable guide to money matters from the man whom Barrons named the #1 independent financial advisor in the country.